Wesselman’s World: Pop Art That Was, Wasn’t, and More

Tom Wesselmann, though not as well-known as his contemporaries Warhol or Lichtenstein, was undeniably as instrumental in the development of American Pop Art, taking the movement in new directions and to new heights, in some cases literally. His unique perspective on the movement drove him to constantly seek new evolutions in his work, and later in his career he pioneered techniques that are in widespread use today. Barnett Fine Art is proud to offer a number of Wesselmann works on consignment, including the notable: Drawing for Bedroom Painting #14.

Born in 1931 in Ohio, Wesselman was studying psychology at the University of Cincinnati when he was drafted into service in the Korean War. In Korea he began to draw cartoons, and after returning to the US and finishing his degree, he enrolled at the Art Academy of Cincinnati, intent on making a career in cartooning. Wesselmann then moved his studies to the Cooper Union in New York, where exposure to the myriad of creative forces of the city inspired to him transition from cartooning to painting and collages.

After graduating from the Cooper Union in 1959, Wesselmann opened a gallery in New York with two friends. Two years later in 1961 he burst onto the scene with his Great American Nude Series, which was similar in aesthetic to the pop art being created by the likes of Warhol and Lichtenstein at the time. Wesselmann, however, distanced himself from the Pop label which was affixed to him, stating “I dislike labels in general and ‘Pop’ in particular, especially because it overemphasizes the material used. There does seem to be a tendency to use similar materials and images, but the different ways they are used denies any kind of group intention.”

Still, the label stuck, as did Wesselmann’s popularity. After completing his Nude series, Wesselmann proceed through several new pop-aesthetic phases. The “Standing Still Life” paintings featured everyday objects blown up to massive proportions on canvas. The “Smokers” series featured disembodied hands lips, and cigarettes, and the “Bedroom Painting” series featured “close-ups of objects, forms and faces in vivid color.” Later in his career, Wesselmann began experimenting with laser-guided cutting, using this new technology to cut sheet metal and create larger-than-life nudes and other hand-cut pieces, a practice which is in common usage today. 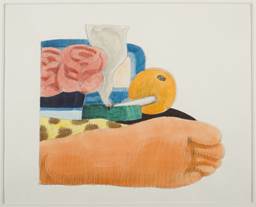 Barnett Fine Art has received an extraordinary consignment.  The owner is selling a superb collection of Tom Wesselmann’s art work.  The collection is varied and offers some very significant original work, including several from the series mentioned above, as well as a few limited editions.  We will feature one or several of the images in the next few blogs. I am still processing the art but welcome any questions and inquiries as to what is available.  I am proud to be able to offer these works by Tom Wesselmann through Barnett Fine Art and look forward to hearing from institutions, collectors and dealers.

This entry was posted on Friday, September 5th, 2014 at 8:49 pm and is filed under Consignment Services . Both comments and pings are currently closed.