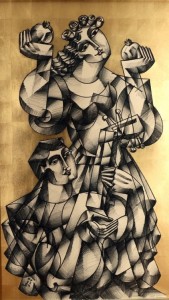 Yuroz is a humanist artist, known primarily for capturing human scenes across a span of mediums and genres. Yuroz speaks in the universal language of symbolism, depicting lovers, musicians, poets, athletes, homeless, and refugees in ways that evoke the emotions and empathy of the human spirit. His style ranges from traditional to modern, often revitalizing the old techniques of the masters to create finished works with authority and gravitas. His latest piece, “Dance with the Pomegranates”, displays the firm grasp Yuroz has on his techniques as well as his ability to create an emotive work of art that touches to the core of the human experience.

Dance with the Pomegranates

“Dance with the Pomegranates” is a delicate serigraph. The work depicts a man playing guitar while a woman holding pomegranates dances to the music. The style, with bold lines and stark geometrical shapes, is reminiscent of Picasso’s cubism with a whisper of influence from Gustav Klimt’s “The Kiss”, made during Klimt’s golden phase. The golden background makes the work seem reverential and at the same time joyous and uplifting. The young couple depicted in the painting share a happy moment in each other’s presence.

The Symbolism of Pomegranates

Yuroz states that the goal of his work is to “celebrate the human spirit”. We can plainly see joy and celebration in the music and dancing of the work. But what do the pomegranates symbolize? Pomegranates have long been used as a symbol in art throughout many different cultures throughout the world. Yuroz created this work after in-depth study of Byzantine, European, and Russian iconography and the work of other iconographers. Thus, the symbolism of pomegranates in these countries play an important role in the creation of this work.

The most common story of the pomegranate comes from Ancient Greece. According to Ancient Greek mythology, the goddess Persephone was kidnapped and taken to the underworld by Hades. Persephone’s mother, Demeter, went into mourning when her daughter was kidnapped, during which time everything green on Earth stopped growing. Zeus demanded that Hades return Persephone to her mother, but Hades tricked Persephone into eating six pomegranate seeds, which sealed Persephone unwittingly into a deal that stated she must return to the underworld for six months of the year. This story was a means of explaining the changing of the seasons. Because Persephone married Hades, the pomegranate came to represent marriage, fertility, and the cycle of the seasons. Yuroz managed to distill the symbolism surrounding the pomegranate into happiness and joy. The fresh, unbroken pomegranates represent the joy of love, the fullness of fertility, the vitality of youth, and the cycle of consensual love. Unlike Persephone, the girl in “Dance with the Pomegranates” is willingly offering her love, with the power of her love–and the pomegranates–in her own hands.

This entry was posted on Wednesday, March 9th, 2016 at 10:57 am and is filed under Art For Your Collection, Collectable Art . Both comments and pings are currently closed.