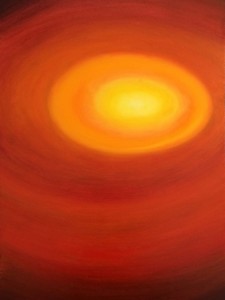 Frank Pietronigro is a new artist with Barnett Fine Art. His art style and technique is entirely different from any other art that Barnett Fine Art has carried. We’re excited to work with him, and we hope that you find his art as captivating as we do!

Frank Pietronigro creates artwork that impresses and inspires. Pietronigro makes art that follows a theme of “the tangible and the illusive, between matter and energy, and between transparency and opacity in support of heterogeneity.” In other words, Pietronigro’s art is all about capturing the balance between opposites, which includes embracing many emotions and states of being. His thoughtful art is even more impressive when you consider his artistic medium: space.

On April 4, 1998, Frank Pietronigro boarded a KC135 turbojet at NASA’s Johnson Space Center. A KC135 turbojet is not a regular airplane; it is a reduced-gravity aircraft that uses parabolic flight to create a near weightless atmosphere. This plane basically flies in a huge arc, and as it’s descending towards the ground, it creates a sense of weightlessness that is the same environment that astronauts experience in space. In fact, this technology is used for training astronauts, for research, and for creating gravity-free movie shots. When Pietronigro boarded a KC135, a reduced-gravity aircraft was used to create art for the first time ever! Pietronigro used the gravity-free atmosphere to create what he calls “drift paintings”. As the artist drifted weightless within the 3D kinetic painting space, he set to work to create paintings that evoked a feeling of levitation, bio-morphic form, a warm glowing light, and a sense of the mystical. He succeeded; not only were these paintings created in a weightless environment, they also inspire the rising feeling of elation, well-being, or contentment that one can feel even when bound to the earth. 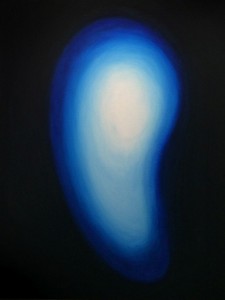 Frank Pietronigro creates his works in a wide variety of different media, including oil and acrylic paintings, works on paper, and digital media. The spirit of pluralism is present in Pietronigro’s works, not just in the different kinds of media but also in the symbolism of the works. The calming effect of Pietronigro’s colorful works make the viewer meditate on their own existence. They also help the viewer forget the harshness of man-made boundaries, like the segregation of sexual orientation and income in our society. True to his work, Pietronigro’s life reflects the morality that is in displayed in his paintings. He served the LGBTQ community in Los Angeles for many years by producing Art in the Park, Intergeneration: Building Queer Community Across the Ages Through the Arts and by serving as the director of the San Francisco Arts Commission Arts Festival. Realizing that he is privileged to afford a ride on a parabolic flight to create his art, Pietronigro became co-founder and project director of the Zero Gravity Arts Consortium (ZGAC). The ZGAC is an international arts organization that promotes economic equity for artists by advocating for greater artist access to space flight technology, just like the kind that Pietronigro used to create his drift paintings.

To learn more about Pietronigro and his work, have a look at this illuminating video by PBS on space artists.

This entry was posted on Monday, October 24th, 2016 at 3:35 pm and is filed under Artists Biography . Both comments and pings are currently closed.