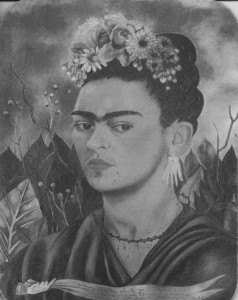 Frida Kahlo was known for wearing traditional Mexican garb, for her unconventional relationship with Diego Rivera, and for her art that depicted her lived experience of chronic pain.

On May 12th, a work by Frida Kahlo, Dos desnudos en el bosque (La tierra misma) (1939), sold at the  Impressionist & Modern Art Evening Sale at Christie’s New York for $8,005,000. Not only is this a new record sale for any work by Frida Kahlo, it’s also unmatched by any other Latin American artist.

Frida Kahlo was a Mexican artist who is often upheld as a feminist icon. Born in Coyocoán, Mexico City, Mexico on July 6, 1907, Kahlo contracted polio at the young age of nine years old. This would be the first of several health problems that would leave Kahlo with severe chronic pain, which she expressed in her art. Several years later, on September 17, 1925, Kahlo was involved in a bus accident where she was impaled by a pole and fractured her spine and pelvis. It was after this accident that Kahlo began painting, and the incident and its effects on her health were featured heavily in several of her paintings, such as Henry Ford Hospital (1932) and The Broken Column (1944). Kahlo was not afraid to express her suffering in her paintings with gruesome detail. In fact, Kahlo abandoned many of the “ladylike” habits that were expected of women at the time. She smoked and swore in public, which contributed to her strong persona. She was uncompromising in her work, and she rejected the label of “surrealism” because she insisted that her work was based more on her reality than on her dreams. It is because Kahlo so ardently expressed herself that she was later upheld as an icon of feminism in the 1970s. 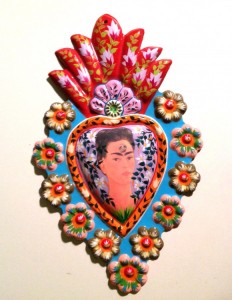 Kahlo’s self-portraits are iconic; today, her likeness is easily recognized.

Hardly anyone knows about Frida Kahlo without knowing about her tumultuous relationship with Diego Rivera. Kahlo was passionate about her politics, and this is how she met and fell in love with fellow artist Diego Rivera. Kahlo first met Rivera in 1922 when he was commissioned to paint a mural at the National Preparatory School, which Kahlo was attending at the time. They reconnected later, in 1928. Rivera encouraged Kahlo’s artwork, and the couple was married the next year. The couple maintained separate but adjoining households and often had affairs, with Rivera notoriously having an affair with Kahlo’s sister, Christina. Kahlo cut off her trademark long, dark hair in response to this betrayal. Later, in 1937, the couple reunited to come to the aid of Leon Trotsky and his wife, Natalia, as they took refuge in the home of the artists. Kahlo and Rivera divorced and remarried in 1940, continuing to lead mostly separate lives. By 1950, Kahlo’s health issues left her bedridden. However, this did not stop her from making public appearances. In 1953, Kahlo appeared at her first solo exhibition in Mexico by arriving in an ambulance and answering questions and interacting with the crowd from a bed that was specially placed in the middle of the gallery. Even after suffering the amputation of her leg due to gangrene, Kahlo still made public appearances, her last being at a political demonstration against the United States CIA invasion of Guatemala just a few days before her death on July 13, 1954.

This entry was posted on Thursday, May 19th, 2016 at 2:38 pm and is filed under Artists Biography . Both comments and pings are currently closed.