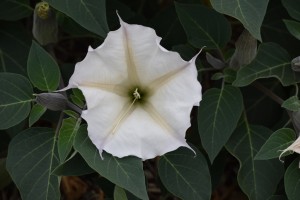 A jimson weed, as featured in Georgia O’Keefe’s top-selling “Jimson Weed/Flower No. 1”.

This is the second year that fine art site Artnet has conducted a survey of the highest-selling female artists to date. Recent auctions at both Christie’s and Sotheby’s have catapulted new artists into the top ranks of high-selling women artists, knocking fan-favorites, like Yayoi Kusama off of the list. After these huge art sales, Artnet has renewed their list of the highest-selling women. These are the top five women.

Natalia Sergeevna Goncharova was a prominent artist at the forefront of the Russian avant-garde movement in the 20th century. Not only was she successful in the Russian avant-garde movement, but her art has also seen huge success on the art market. In the past, Goncharova’s Picking Apples (1909) sold for $90.8 million and her Espagnole (1916) sold for $10.2 million. In 2008, Goncharova’s prior record was beaten by the sale of Les fleurs (1912), which sold at Christie’s London for $10.8 million.

Berthe Morisot is a master of the impressionist style, whose works have often fetched high sums at auction. Her highest-selling piece is  Après le déjeuner (1881), which sold for $10.9 million at Christie’s in 2013.

Coming in at number three is Joan Mitchell’s Untitled (1960), which sold for $11.9 million at Christie’s New York in 2014. Joan Mitchell is a beloved abstract impressionist whose art has been reaching new heights in terms of value at auctions. When Untitled (1960) sold, it set a new record for all women artists at auction. Earlier this month, Mitchell’s Noon (1969) sold for $9.8 million, proving that confidence in her art is still strong.

Louise Bourgeois comes in second with a bronze sculpture, rather than a painting. Spider (1996) reached $28.2 million at a Christie’s Post-War sale last fall. The imposing bronze sculpture stands nine feet tall, literally towering over its competition.

This entry was posted on Friday, May 27th, 2016 at 1:13 pm and is filed under Art News . Both comments and pings are currently closed.