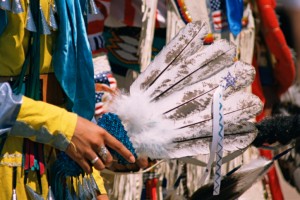 Robert Redbird was known for his depictions of Native American imagery.

The art world mourns the loss of iconic Native American artist Robert Redbird, who passed away early Saturday morning after an extended illness. Redbird was known for creating drawings and paintings that displayed the deep beauty and diversity of Native American culture. His works became known as the quintessential Native American art. His works, varying from depictions of women wrapped in blankets to symbolic images of eagles and pottery, came together to form a tapestry of Native American imagery. Redbird was an Oklahoman and member of the Kiowa tribe. He was so appreciated by his community that the state of Oklahoma declared June 7 “Robert Redbird Day” in 2003. Redbird felt a deep connection with his people and his tribe; he even signed all of his paintings with a feather and the word “Kiowa” rather than his own name. After his passing, many remember the great influence Robert Redbird had on the world around him.

Robert Redbird was an Oklahoman treasure, prided for his graceful and genuine depictions of iconic Native American imagery. When Robert Redbird Day was declared in 2003, the text for the declaration, created by then-Oklahoma Gov. Brad Henry, stated that “Robert Redbird’s art is full of his conviction that Native American culture is a beautiful way of life and his art conveys his feeling for Kiowa tradition and ceremonies, for the spiritual in the culture of many tribes and for the world of nature.”

Art from Native Americans is essential for keeping the Native American narrative alive in America, where many Natives still struggle to keep their basic rights and procure the same opportunities as other Americans. Not only did Redbird’s work keep the Native American presence established in the world of fine art, it also depicted Native American imagery in a way that is dignified and genuine. Redbird’s work celebrates the traditional life and culture of Native Americans by depicting them with beauty and grace. Not only was Redbird a great painter, but he was also an advocate for the less fortunate. When he lived in Scottsdale, Arizona, he sold paintings to raise money for disabled children to attend a camp that would take them on field trips and afford them other experiences that they would not normally have access to. Redbird’s contributions totaled $56,000. This great Native American was not only a skilled artist but also a caring humanitarian.

This entry was posted on Wednesday, March 9th, 2016 at 11:31 am and is filed under Art News . Both comments and pings are currently closed.