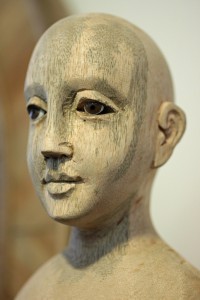 Marisol Escobar would sculpt figures out of wood, fabric, and found items.

On Saturday, April 30, the beloved sculptor Marisol Escobar passed away due to pneumonia. Rolando Peńa, Escobar’s friend and fellow Venezuelan artist, expressed his loss on his Facebook page, calling her the “undisputed queen of pop art.” Marisol was an American artist of Venezuelan descent who became famous in New York art scene in the 1960s for her fusion of Pop Art imagery with folk art assemblages and sculptures. She was influenced by pre-Columbian art and the assemblages of Robert Rauschenberg. Her art style consisted largely of tableaus of carved wooden figures that were embellished with found objects, drawings, and fabric. Her rustic art style stood in juxtaposition with her subjects: famous and influential people in the public eye. Her unique art style, combined with her mysterious, Garberesque persona, made her a cultural icon of the 1960s.

A Subtle Kind of Pop Art

Many critics in the 1960s were torn over how to label Marisol’s art. One critic, Lucy Lippard, argued that her work was not pop art, instead saying her work was “a sophisticated and theatrical folk art” that was removed from Pop. However, many other critics begged to differ, saying that because her art featured pop icons and consumerist imagery it had to be defined as Pop Art. Her frequent company with Andy Warhol also points to her presence on the Pop Art scene. She even made a sculpture of Warhol out of wooden boxes, along with many other assemblages of famous icons, like the Kennedy family, the Royal Family, President Lyndon B. Johnson, John Wayne, and Bob Hope. She would often also incorporate commercial features in her art, such as with her famous “Love” (1962), which displays an upended Coca-Cola bottle supported by a cast of her mouth.

The Mystique of Marisol Escobar

Marisol’s personality played an important role in her fame. The public’s obsession with her mysterious personality almost eclipsed the interest in her art. Marina Pacini, the chief curator at the Memphis Brooks Museum of Art, says that “[Marisol] was an incredibly significant sculptor who has been inappropriately written out of history. In the 1960s, she had more press and more visibility than Andy Warhol.” Interviewers had difficulty talking to the elusive Marisol, and her art dealers were often frustrated when she would suddenly leave for a long trip across the world. Her elusiveness and aloof personality fueled the public’s obsession with seeing her unique art and viewing her in Warhol’s films, “The Kiss” (1962) and “13 Most Beautiful Women” (1963). In one rare interview, she was asked how she would like her work to be seen by the critics and the public, she responded “I don’t care what they think.” Her detachedness only fed into the public’s love of her iconic work.

This entry was posted on Monday, April 25th, 2016 at 8:59 am and is filed under Art News . Both comments and pings are currently closed.