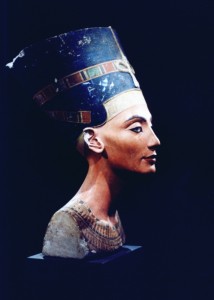 The bust of the Egyptian queen Nefertiti is a cultural icon, both for Egypt and Germany.

When would you say art theft is justified? The increasingly powerful influence of technology in our society makes it possible for museum curators to produce a 3D scan of individual art objects in order to store the blueprints for study, reproduction, and conservation. In fact, many of the art that has been destroyed by ISIS is being successfully recreated from scanned data. Many museums, including the British Museum, the Met, the Art Institute of Chicago, and the Musée du Louvre, have encouraged visitors to scan art with their phones so that the data can be stored privately for the museum’s internal use. However, few people are discussing whether this data should be available to the public. This is an important issue, especially when cultural appropriation comes into play. This is why two German artists, Nora al-Badri and Jan Nikolai Nelles, decided to create a 3D scan of the iconic bust of Nefertiti and release the scans to the public.

The Art Theft in Question

Nora al-Badri and Jan Nikolai Nelles modified an Xbox motion sensor and used it to secretly scan the bust of Nefertiti at the Neues Museum in Berlin. Two months later, they released their 3D-printable scans under a Creative Commons license at the Chaos Communication Congress in Hamburg, Europe’s largest hacker conference. Within 24 hours, over 1,000 people had downloaded the torrent. The artists continued to print two busts, one that they buried in the desert in Egypt, the other they painted to look like the original and donated to the American University in Cairo.

Where Does Nefertiti Belong?

Nora al-Badri and Jan Nikolai Nelles took a huge risk in illegally scanning the bust of Nefertiti. The artist performed this daring act to make a statement about the accessibility of art and cultural appropriation. The bust of Nefertiti was discovered in Egypt by German archaeologists in 1912. Germany holds fast to their claim of ownership of the historic art with the justification that they discovered the bust. However, Egypt argues that the bust should stay in its country of origin, because it is a part of Egypt’s cultural heritage, and Egypt’s people have a right to have easy accessibility to the art.

Art for the People

While many museums have embraced public scanning of art, most keep their scans rather than release them to the public. The Prussian Cultural Heritage Foundation “hasn’t yet discussed a policy on scanning.” While the Neues Museum may not have had any public scanning events, they do have their own personal 3D scans of their collection. The bust of Nefertiti is the jewel of Germany’s state museum antiquities collection, and last year the museum used their personal 3D scans to produce 100 hand-painted replicas of the bust, which they sell for about $9,650 each. Artists like Nora al-Badri and Jan Nikolai Nelles have been championing “art for the people” for years. While the Neues Museum has made copies, the copies have not been distributed around the world and to the bust’s country of origin for more people to see; rather, the copies were sold to those who could afford them, with the profits benefiting the museum only. By releasing a free torrent of the 3D scans, anyone around the world with a 3D printer can make their own replica and display it. They are also able to display a near-perfect replica of the original bust in the bust’s home country. This means that the art can be viewed and appreciated by more people around the world.

While many people agree with the actions of the German artists, many others view their illegal scanning as reprehensible. Many museum curators view new scanning technology as a challenge to museums. The Neues Museum argues that its ownership of the Nefertiti bust is “legally indisputable” and that the Egyptian state has never officially filed a restitution claim for the bust. Many oppose art repatriation because they consider viewing the art among a collection of antiquities from around the world as the best way to appreciate it.

No matter which side you are on, the emergence of powerful 3D scanning technology raises several questions about how protected art is and where art belongs. Read more about this interesting story at The New York Times.

This entry was posted on Wednesday, March 16th, 2016 at 2:16 pm and is filed under Art News . Both comments and pings are currently closed.