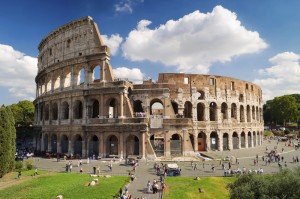 In an effort to generate revenue, the government of Italy has considered a number of actions with regard to the art world, such as allowing commercial sponsoring of the Coliseum, that have been met with a critical response. Unfortunately, the country was also ripe for art scandals in 2014. To name a few:

Fake Cash for a Fake Goya

In 2014, two Spanish brothers who were knowingly in possession of a fake Francisco de Goya found a buyer for the painting through a middleman. The buyer claimed to be a sheikh, and agreed to pay 4 million Euros in a series of transactions, the first of which involved 1.7 million Swiss francs. The brothers even verified that the money was legitimate. However, the middleman managed to switch the money with counterfeit currency prior to the transaction. A Swiss bank rejected their deposit and informed them that the money was counterfeit, and customs informed the Spanish government of the large sum of money they had attempted to smuggle across the border.

To make matters worse, the brothers paid the middleman a finder’s fee of 300,000 Euros, which he and the purported sheikh made off with. They had borrowed the sum from a friend, promising to pay him back with interest. The brothers were arrested in December 2014.

The whereabouts of Picasso’s 1911 painting, La Coiffeuse (The Hairdresser) were unknown for more than 10 years, after it was stolen from the Centre Georges Pompidou in Paris. Last December, the lost painting showed up at customs in the U.S., on its way from Belgium to a climate-controlled warehouse in Long Island City. The package had been tagged as a Christmas gift “art craft” and valued at $37. The painting was seized and eventually returned to the French museum. The identity of the sender is unknown.

The Death of Cornelius Gurlitt

The death of Cornelius Gurlitt in May of last year marked the end of the life of an art collector who was well known for amassing his 1,300 work collection of former Nazi-held art through questionable means. Many of the original owners of the works (before they were stolen by the Nazis) stepped forward to claim restitution. Gulitt bequeathed his entire collection to the Swiss museum Kunstmuseum Bern in his will, which accepted the gift amid some public criticism.

This entry was posted on Friday, March 20th, 2015 at 4:59 pm and is filed under Art News . Both comments and pings are currently closed.