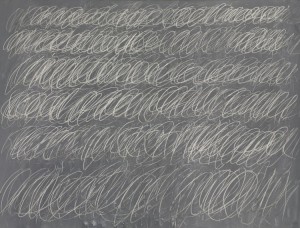 Earlier this year, the world was shocked as Cy Twombly’s
“Untitled, New York City, 1968” sold for an impressive $70.5 million.

2015 has been marked by a small concentration of artists having a firm grasp of the art market. Although there are over 49,000 contemporary artists on the market, most fine art buyers have spent 2015 seeking out art by a few well-known names. These “trophy names” have dominated the art market. Of the $1.2 billion in revenue generated from contemporary art sales in 2015, 68% was generated by just 100 artists, and 35% by just ten artists! It seems that the trend of 2015 was to collect those few big “trophy names”.

Who Was the Biggest Seller?

Jean-Michel Basquiat, Christopher Wool, and Jeff Koons are responsible for generating an impressive 18% of the global contemporary art sales. These three artists have been the top-selling artists for the past three years, generating nearly half of the US revenue from contemporary art sales. The only difference between 2015 and prior years is that Jeff Koons and Christopher Wool have switched places, with Christopher Wool outselling Jeff Koons by roughly $40 million. The top-seller out of the contemporary art triumvirate is Jean-Michel Basquiat. Basqiat’s “Orange Sports Figure” originally sold for $66,000 at the beginning of the 1990s. This year, it reached an astounding $8.8 million when it was sold on July 1 at Sotheby’s.

2015 has seen some surprising fine art sales. The world watched as “Untitled, New York City, 1968” sold for $70.5 million, breaking the record for highest price paid for a Cy Twombly piece and being the most expensive art work sold at Sotheby’s in 2015. The piece consisted of a canvas painted to look like a blackboard with Twombly’s signature scribbles. The sale invigorated the fine art market and sparked conversation all over the world. In England, Christie’s was also setting records. A week before the sale of the Twombly piece, Modigliani’s “Nu Couché” broke records for being the second most expensive piece ever sold at auction, reaching $170.4 million. This year has seen tremendous fine art sales that have shaken the fine art world.

Modigliani’s “Nu Couché” was the most expensive piece ever sold at an auction, fetching a whopping $170.4 million.

2015 has also been a year for shocking art news. In November, experts at Moscow’s Tretyakov Gallery performed an x-ray analysis of Kazimir Malevich’s iconic “Black Square”. The x-ray revealed two underlying paintings and an irreverent handwritten note. The first layer of the painting is a Cubo-Futurist work. The piece immediately underlying the surface, of which you can see the colors through the cracks in the paint, is a proto-Suprematist. The inscription underneath the surface of “Black Square” was revealed to read: “Negroes battling in a cave.” This surprising text is thought to be a reference to an earlier painting by Alphonse Allais titled “Combat des Negres dans une cave, pendant la nuit” (“Negroes Fighting in a Cellar at Night”). Although Allais’ painting may be a crass joke, Kazimir’s work could be interpreted as something deeper and more thoughtful, due to the many layers of the painting. Indeed, with the knowledge revealed by the recent x-ray, we can view “Black Square” as a chronicle of the artistic development of Kazimir and a view into the depth of the artist’s artistic knowledge.

The second shocking development of 2015 is an ongoing event. The team behind the popular card game Cards Against Humanity recently purchased an original 1962 Pablo Picasso linocut print—which is one of an edition of 50 and valued at $14,000—as part of their “Eight Sensible Gifts for Hanukkah”. 150,000 people paid $15 each to receive eight gifts from the Cards Against Humanity team. One of the gifts involves Picasso’s “Tête de Faune” (Head of a Faun). Participants can vote to either donate the piece to the permanent collection of the Art Institute of Chicago or have the piece laser cut into 150,000 1.5mm squares and mailed to each participant. Voting ends on the last day of 2015, after which the Cards Against Humanity team will reveal the fate of this Picasso piece in this interesting social experiment.

This entry was posted on Wednesday, December 30th, 2015 at 10:12 am and is filed under Art News . Both comments and pings are currently closed.