Valentine’s Day is only a few weeks away! Have you thought about what you’re going to get your significant other? Done the classic chocolate and flowers routine one too many times? Start a new tradition and express your love in a creative and unique way, with art! In the spirit of the upcoming holiday, here are a few ideas for gifts for your loved one.

Jim Dine may be best known for his uniquely personal style, which he began to create in the early 1970s. While Dine had gotten involved with the Pop Art movement, he posed a counterpoint to the cold and impersonal style of Pop Art with a warmer, more personal aesthetic. His drawings are known for their sensitive, simple and figurative depictions of tools, robes, and other everyday objects.

Today, Dine’s personal aesthetic is still a hallmark of his artwork. The work pictured below, Sunflower, is a perfect example of the warmth for which Dine is so well known. 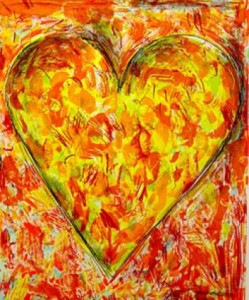 Marc Chagall – Heart of the Circus

A Russian-born French painter and designer, Marc Chagall was known for his inventive take on surrealism and is recognized as one of the most significant painters and graphic artists of the 20th century. He may be best known for his circus suit, Le Cirque, which showcases his technical mastery in color lithography.

Below is Chagall’s, The Heart of the Circus, a work that puts his creative and playful surrealism on full display. 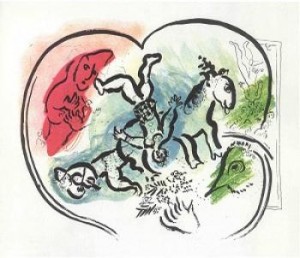 Marc Chagall – The Heart of the Circus

Erte may be best known for his graphics, which produced a resurgence of interest in Art Deco when he began producing them in the 1960s. But his skills in sculpture were equal to his graphic design skills, and Erte continued to create magnificent sculptures throughout his long and celebrated career. Below, appropriately enough for Valentine’s Day, is Love Goddess.

Alex Katz’s work is immediately recognizable for its purely representational approach to its subject matter. Figures and subjects are painted in flat planes of saturated color. Katz was heavily influenced by the American Expressionists, as well as Jackson Pollock. If your Valentine loves the ideas of roses, White Roses by Alex Katz is perfect. Take the tradition of giving flowers to a new level with White Roses.

As a costume and set designer, Erte created some of the most influential designs in Parisian theater in the early 20th century, pioneering the Art Deco movement. His design skills are exemplified in the two works below, Veil Gown and Fringe Gown from the June Bride Suite. 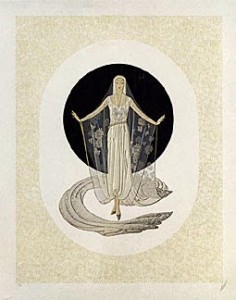 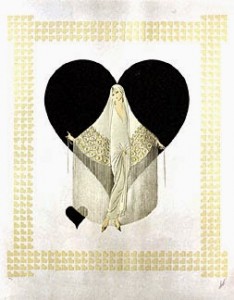 This Valentine’s Day, give the gift of art.

This entry was posted on Tuesday, February 3rd, 2015 at 2:06 pm and is filed under Art For Your Collection . Both comments and pings are currently closed.