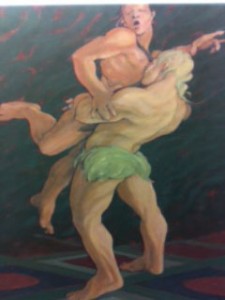 Barnett Fine Art is proud to offer an original oil painting by George Dureau. “Hercules and Anteaus” by George Dureau aptly captures raw human emotion and the versatility and beauty of the human body. The male subjects exhibit raw strength and emotion, which is a running theme in Dureau’s work. The interaction of the two subjects combined with Dureau’s flowing style perfectly captures a moment of movement, so that the subjects look as if they could suddenly fall into motion at any moment. Read on to learn more about the story behind this painting and about the themes of George Dureau’s body of work.

The Mythology of Hercules and Anteaus

In Ancient Greek mythology, the demigod Hercules fought the god Anteaus during his 12 labors. Anteaus was the son of Poseidon and Gaia. He was famed for his ability to win every wrestling match he fought; as long as his body was in contact with his mother earth, he was invincible. Since wrestling involves pinning your opponent to the ground, every person who tried to pin Anteaus would only make him stronger, leading to his inevitable victory every time. Hercules came into contact with Anteaus as he was on his way to the Garden of Hesperides and fought him in his 11th Labor. Realizing that Anteaus could not be defeated if he was touching the ground, Hercules lifted him off the ground for a final move that ensured Hercules’ victory. The scene was a popular inspiration for many sculptures during the Renaissance. George Dureau captures the classic scene in a traditional oil painting that is reminiscent of several great Renaissance artists, such as Michelangelo and Giovanni Battista Trotti.

George Dureau has a long history of using several mediums, including paintings, charcoal sketches, and black-and-white photography that capture the essence of the human spirit. His epic oil paintings are often inspired by heroic and mythic stories. These stories often address morality, emotion, and truth. With Dureau’s penchant for portraying sensitivity, compassion, and passion, it only follows that he would find his inspiration from these classic tales that are centerpiece to budding human civilizations. Although the mythology that Dureau derives his inspiration from is age-old, the themes in both the stories and Dureau’s works are persistent and universal. This is why Dureau’s skillfully-crafted paintings appeal to so many people. The rhythm produced by Dureau’s flowing lines creates a captivating finished product that is sure to engage viewers.

This entry was posted on Friday, April 22nd, 2016 at 3:09 pm and is filed under Art For Your Collection . Both comments and pings are currently closed.