Ada With Sunglasses features one of Alex Katz’s favorite subjects, his wife. Ada has been the subject of more than 250 of Katz’s portraits over the course of his long career. This particular work exemplifies Katz’s immediately recognizable style. The two-dimensional head-on perspective coupled with a limited yet discerning color palette that emphasizes the study of light and color is the hallmark of his portraits. Katz remains well-known for finding the harmony between representational figuration and abstraction throughout his works and throughout his career. Learn more about Alex Katz, below. 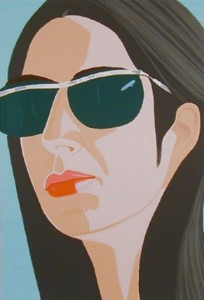 Portraits comprise a large body of Katz’s work. His interest in portraiture dates back to the 1960’s, when he began painting portraits of friends in a style that was heavily influenced by the aesthetics of advertising and media of the era. In addition to the aesthetics on the canvas, commercial advertising influenced the aesthetics of Katz’s canvas itself; he readily incorporated the large surface area and dimensions of billboards into his own works. Many of his portraits are measured in feet, not inches. Red Smile, for example, is nearly 10 feet wide. Ada With Sunglasses is a more manageable 36″ x 24 ¼”.

Katz described the subjects of his portraits as “downtown bohemian.” His favorite subjects included his wife, fellow artists in his large social circle, and pool side bathers. A lifelong resident of New York City, also found much of his subject matter in the landscapes of Maine, where he studied art and where he spends several months out of the year working.

Alex Katz’s influences include American Scene artists and European and American modernism, among others. His signature style has been described as a forerunner of Pop Art, due to its large scale, simple subject matter, and the influence of commercial advertising.

Katz uses the word “surface” to describe his art, the meaning of which is two-fold. In terms of aesthetics, surface refers to his emphasis on flatness, color, and clean lines. In terms of subject matter, surface is used to refer to his preference for representing his subjects as they are, without any undertones.

Overall, Alex Katz may be best known for his ability to deftly introduce a dash of abstraction into his figuration. While the subject matter and its rendering owes much to a representational approach, his ability to blend in abstract components such as large sense of scale in aesthetics is the hallmark of his work.

This entry was posted on Thursday, August 6th, 2015 at 1:53 pm and is filed under Art For Your Collection . Both comments and pings are currently closed.