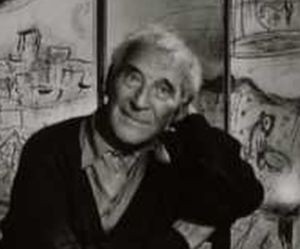 Marc Chagall (1887-1985) was a Russian-born French painter and designer, distinguished for his surrealistic inventiveness. He is recognized as one of the most significant painters and graphic artists of the 20th century. Chagall was born July 7, 1887, in Vitsyebsk, Russia (now in Belarus), between 1915 and 1917 he lived in Saint Petersburg; after the Russian Revolution he was director of the Art Academy in Vitsyebsk from 1918 to1919 and was art director of the Moscow Jewish State Theater from 1919 to 1922. In 1923, he moved to France, where he spent most of the rest of his life. He died in St. Paul de Vence, France, on March 28, 1985. His early works combine Russian village scenes, folklore and fantasy. Biblical themes characterize a series of etchings from the Bible Series, illustrating the Old Testament. Chagall created the wonderful 12 stained-glass windows in the Hadassah Hospital of the Hadassah-Hebrew University Medical Center in Jerusalem as well as the spectacular mural on the ceiling of the Paris Opera House. Chagall’s Daphnis and Chloe Suite, completed in 1962 and his circus suite, Le Cirque, are considered to be some of his finest work. The color lithography of these images shows the genius of the artist as he rose to the technical maturity of a master