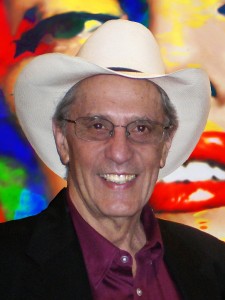 During the fifties and sixties “Pop Art” became a recognized form of expression. The “Pop Art Icons” of this group included Andy Warhol, Roy Lichtenstein, Tom Wesselmann, Edward Hopper, Jasper Johns, Frank Stella, Robert Indiana, Robert Rauschenberg, Claes Oldenburg, James Rosenquist and James Gill. James Francis Gill, a prominent artist of the movement is ranked next to Andy Warhol and Roy Lichtenstein. Gill is one of the last Pop Artists still alive today. Over 30 years ago James Gill “dropped out” leaving a very successful career in the Pop Art movement. He has returned to the present art culture, his talent and imagination as impressive as ever. The works of James Gill are exhibited in the Museum of Modern Art, New York, The Whitney, The Smithsonian Institute, Art Institute of Chicago and the National Portrait Gallery. Life Magazine did an article on James Gill and Jim is the only Pop Artist to be commissioned by Time Magazine to design the cover. Gill and his new publisher have collaborated to produce extraordinary Limited Edition prints. Serigraphs are printed on high quality hand made paper and each is signed and numbered by Gill. Original paintings may also be available, both from the period of Jim’s self exile and the present This is “investment art”. Buy what you can now. Gill’s prices should begin to climb to the level of those Pop Artists reknown throughout the world