Limited Edition but not a numbered series. According to Rodrigue’s wife This imagine marked a change in the Blue Dog series. Rodrigue began painting Tiffany with people rather than alone. Rodrigue’s nudes were very controversial this work was no exception. “Considering the trouble George had with the public regarding his nudes early on, it’s ironic that among his most popular Blue Dog paintings are his recreations of famous classical figurative works. The painting Right Place, Wrong Time (1991, 48×36) is based on The Turkish Bath by Jean Auguste Dominique Ingres, 1862.” Call Patty Barnett for price 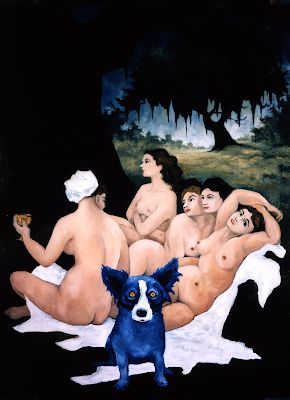